At yesterday’s DC PHP Developer’s Community Meetup Andrew Cassell gave a really nice presentation on Domain-Driven Design. He described the major books in the field, some of the main movers and history, and what the idea is all about.

In a nutshell, it says to understand your customers’ problems in their language, talk to them in their language, and discuss your proposed and executed solutions in their language. If you’re sensing a pattern here then you’re onto something. You are supposed to be the expert in all the computer twiddlage that you do, but your customers are not, nor generally should they be. They are the experts in all the domain-specific twiddlage that they do, and you need to respect that. Then you need to learn it. You don’t have to learn it to the level that they know it, but you have to learn enough about what they’re doing, and how they describe it, to be able to give them the functionality they need.

As Andy described, programmers tend to start thinking about data structures and UI screens as soon as they start to get some input (i.e., as soon as they start listening to the customer describe what it is they do). That’s not a bad thing, it’s a reflection of their passion and expertise. But any passion needs to be controlled, and rushing to cook up a solution before you truly understand the problem is a “one-way ticket to Palookaville.”

There’s more to it, of course, and the talk covered a lot of the tactical considerations like isolating sections of software that represent different areas of business functions so they communicate using messages rather than a closer type of coupling. Also described was how statements should be streamlined and clarified so the code itself clearly expresses business logic. Doing this ensures that elements within the computing system are always in a valid state and thus don’t need to be continuously parsed and error-checked. If done correctly — and this has always been a feeling of mine — once you understand the customer’s problem domain and have mapped out their process in sufficient detail, your code practically writes itself.

I listened to the talk with great enthusiasm because I feel I’ve essentially been doing this for my whole career. I know that the method is extremely powerful and it’s helped me write a lot of amazing software, but I haven’t felt like I’ve ever gotten anybody to understand it (this is actually the reason I created this website in the first place). People look at my resume and don’t see the common thread that holds the whole thing together. They see a bunch of different jobs, industries, and tools, many of them older, and don’t think any of it applies to them.

I cannot tell you how frustrating this has been.

Each person has their own history influenced by different sets of people, places, and events, and they each create a unique synthesis because of it. I got my degree in mechanical engineering but also took a heavy dose of computing courses (it was Carnegie Mellon after all…), so it was natural that I would try to focus my computing skills on the problems I encountered working in the paper and nuclear industries. In particular, I was a process engineer who studied, designed, and improved fluid systems where a series of pipes moved liquids (and other materials) from one machine or process to another. These things were all described by drawings like those shown here. 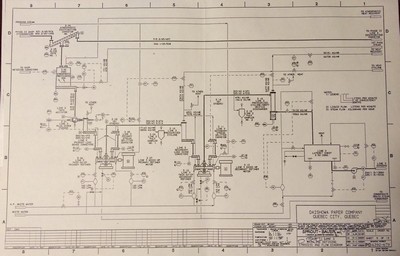 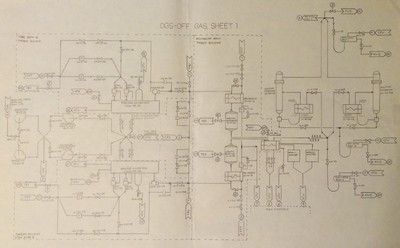 Analyzing these systems required having a map of what went where and a description of what happened in each component of the system. There were inputs, outputs, volumes, compositions, masses, flows, volumes, compositions, temperatures, energies, surface areas, variations, energy transfers, elevation changes, geometries, and transformations at every step of the process that had to be described using language appropriate to that domain (which in these cases included thermodynamics, fluid mechanics, differential equations, knowledge of making wood pulp, chemistry, radiation, failure modes, connections, and the steam cycle, many different kinds of process equipment, and other things). I first got used to working with fluid and piping systems in the paper industry but mostly did ad hoc analysis and designed a few of my own tools. When I moved to the nuclear industry it was to build full scope operator training simulators, which meant hooking complete reproductions of all the control room hardware to first principles computer models of all the fluid and electrical systems in a given nuclear power plant.

Such an undertaking requires a deep level of understanding and a huge organizational effort to get everything in order, properly labeled and interfaced, built, documented, tested, shipped, installed, verified, and accepted. In order to simulate something you need descriptions of every facet of the system and its behavior that has a material effect on its operation. In software terms this means you have to define every variable, data structure, calculation, transformation, and transfer in the system. You have to define them, name them, determine initial values for them and determine acceptable ranges of values, and test them.

If all of this didn’t happen, and with sufficient accuracy, then the thing simply wouldn’t work.

After working on projects like this I found it to be a really easy transition of doing business process reengineering using FileNet document imaging systems. In these projects the goal was to map out a company’s business processes, and then write software that allowed users to view scanned images of large volumes of paper documents in the course of their collating and evaluation work instead of the physical documents themselves. Big companies like banks, credit card processors, and insurance companies were practically deluged with paper documents back in the day but I worked with teams of consultants who added a scanning and indexing step at the front of a company’s process, and then automated the process to remove all subsequent physical handling of the documents. The combination of eliminating physical handling steps and streamlining evaluation processes through automation support reduced system costs by up to thirty percent.

We figured out what the customers needed by having them walk us through their process, which we then documented, mapped, and quantified. This defined the As-Is state of their process. We then identified the process that would be eliminated or streamlined through automation, determined the overhead, requirements, and costs of the new scanning step, and documented the configuration, costs, and requirements for the new system. This defined the To-Be state. For a disability underwriting process the domain knowledge included document indices, names, addresses, companies, medical records, risk profiles, scoring systems, sorting/scoring/collating methods, and determinations of feasibility and costs. In order to build such a system we had to talk to executives and workers in every one of the company’s operations. We never talked to the customer about the behind-the-scenes geekery that we loved as programmers, we only talked about, documented, an analyzed things in the language that we learned from them.

Once we did that then generating the UI screens, data structures, calculations, and summations were almost trivial to implement. I’ve since done the same things in other jobs and industries, as detailed in the common thread link above.

Were the programming tools different? Yes. Was the domain knowledge different? Sure. Were there still inputs, outputs, transformations, routings, decisions, and results?

Yup. Bingo. And that’s the point. The words change but the melody remains the same. I’ve learned a lot of things during my career, but this underlying understanding of how to work with customers to figure out what they need, in their own language, so I and my colleagues can give them the best possible solution, is my superpower, if I can be said to have such a thing.

I the method for establishing and documenting a mutual understanding with the customer, and then progressively advancing through the design, implementation, testing, and acceptance of the solution is this:

In summary, the need is defined; the details are identified; a solution is proposed, implemented and tested; and a judgment is made as to whether or not it succeeded. The artifacts of the system can be listed like this, and they should be mapped in both directions every step of the way. If all needs are identified and addressed as being acceptable, then the system cannot help but be fit for the intended use.

The level of effort that goes into each step should vary with the scope and scale of the project. I describe a heavyweight methodology I was required to use for a high-profile system used to manage fleets of aircraft for the Navy and Marine Corps here. The nuclear power plant simulators I worked on employed a very similar process, and all of the other projects I participated in over the years scaled down from there.

As a final note I’ve often described how I always like to automate processes and develop tools. To that end I have written programs that implement business logic in a block-level form, such that the blocks can be connected together in a way that, when the properties of the blocks, connections, and processed entities are defined, the business logic is instantiated automatically. This is a form of Domain-Driven Design in that the components of the computing system (the blocks, connections, controllers, entities, and so on) are purpose-built to represent a particular aspect of a given problem domain. Such systems exist for electrical circuits (SPICE), business process models (BPMN), Port-Of-Entry Modeling Systems (BorderWizard and related tools I worked on), and more. I’ve written tools like this to model nuclear plant fluid systems and certain classes of general purpose, discrete-event systems. 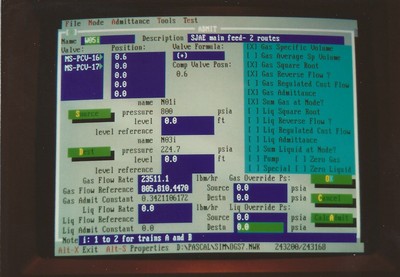 The discrete-event simulation framework I’m building is a form of visual or graphical programming (as distinguished from merely programming graphics). Here is an interesting discussion on the subject. It appears that visual paradigms work better at the level of business logic in a specific domain rather than trying to displace the low-level constructs of conventional languages.