Biosphere 2 and a Small Bonus!

I had pre-positioned in Tucson where, after a brief deluge that was almost the only rain I’d seen, I finally got to visit Biosphere 2, which I’d wanted to see since it was built. I’d been in the area a few times doing discovery and collecting data for border crossings, but had never taken the time to stop in. Along with the perpetual sunset as I pulled into Yellowknife at midnight, it was probably the highlight of the trip. 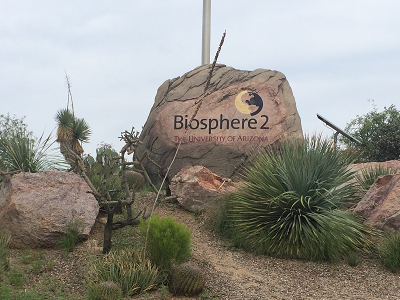 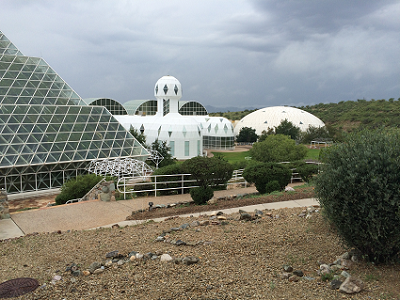 The view as you walk in from the parking lot. I’m a sucker for space frames, metal and glass, and futuristic architecture, so it had me at “Hello!” 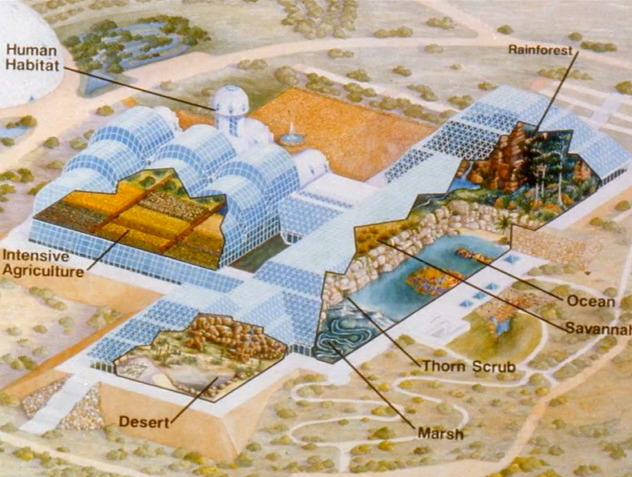 Here’s how the interior was laid out, with the five biomes, the agricultural section, and the living quarters. (Picture borrowed from this TED talk.) 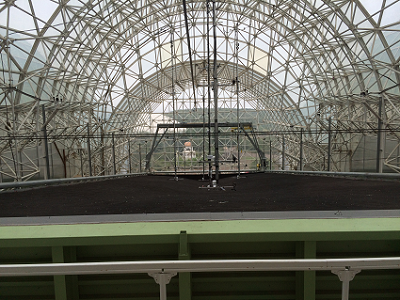 The agriculture sections have been converted to experimental bays. The movement and behavior of moisture is under investigation in this one. 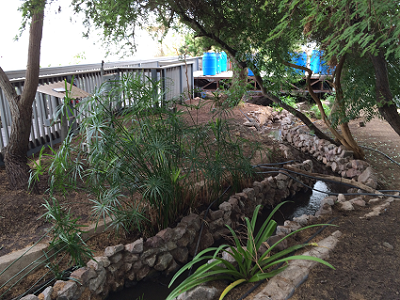 A river runs through the savanna biome, toward the desert in the background. I’m guessing this was more densely planted during the initial missions. 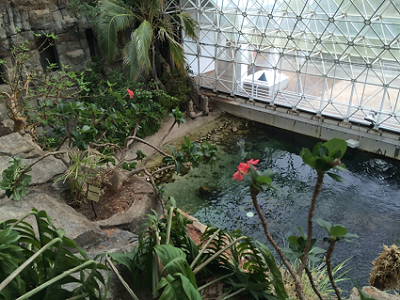 Here’s the beach end of the ocean biome. 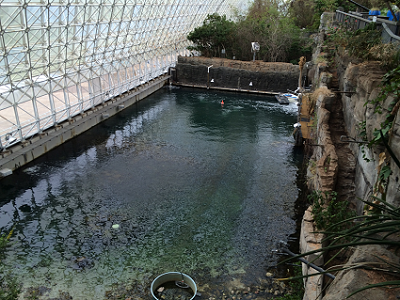 The marsh biome was at the far end of the ocean. I never got a decent picture of it from inside. 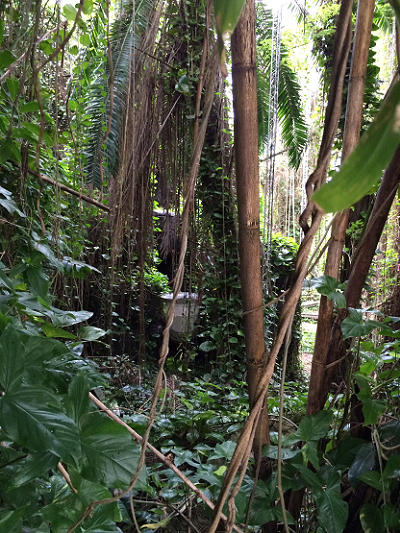 You don’t really get a feel for the space in the rather large rainforest biome, though this picture suggests that it goes on for a bit in the background. There’s a waterfall in there somewhere.

The fog desert biome looked rather different in every direction. This was my favorite angle. 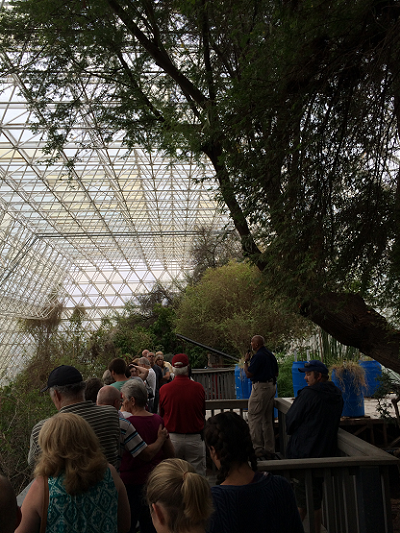 This was my favorite interior shot, which gives you a feel for the space, and has lots of that lovely metal and glass and space frame-y stuff. 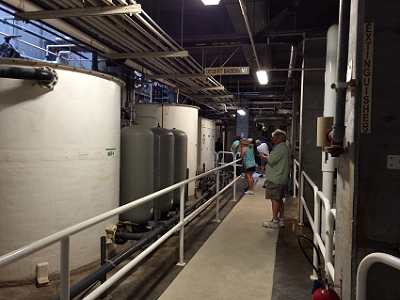 The desire may have been to create a stable interior environment where the sections interact and maintain themselves naturally, but the extant reality means that some help was needed. The tanks, pipes, valves, pumps, filters, and control hardware reminded me of all the time I spent in paper and steel mills. I was right at home down there!

One of the most interesting features of the complex was the “lung”, a huge diaphragm that allowed the interior volume to vary so the interior pressure could equalize with the exterior pressure. Without this feature the glass window sections would be blown in or out. The diaphragm (or perhaps the entire lung enclosure) is about 180 feet across. The metal disk in the center is heavy at 16 tons and moves up and down by tens of feet. The diaphragm itself is four tons or rubber. 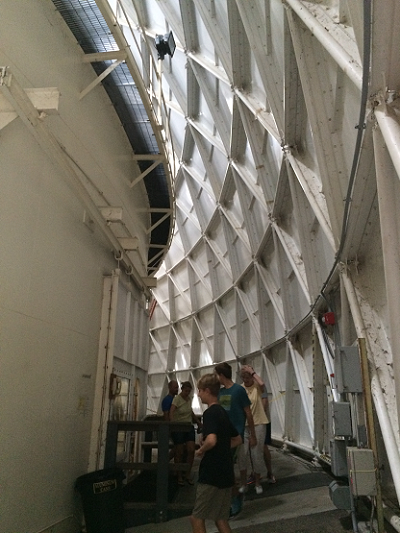 Opening the door allows huge volumes of air to escape the lung interior. You can see the disc lower significantly.

Here’s the back side of the complex and the exterior of one of the lungs. A second lung is available as a backup, but it has apparently never been used. 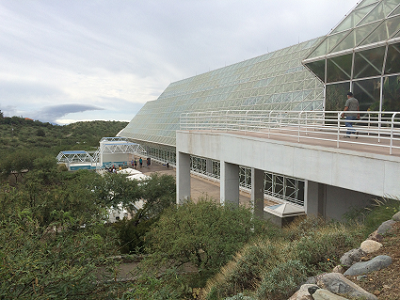 Another view along the outside. The rainforest is in the foreground and the desert in the distance. 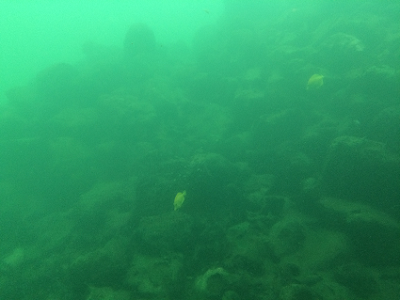 The ocean can been seen from the outside through a window. We were told that the goal is not to run an aquarium but a more natural system, thus the cloudiness of the water. Interestingly, some scuba divers were practicing for certification in the ocean during the tour. 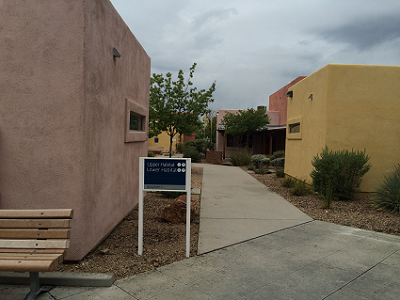 I really enjoyed the faux New Mexican adobe look of the complex of service buildings on the site. They really added to the ambiance of the place. 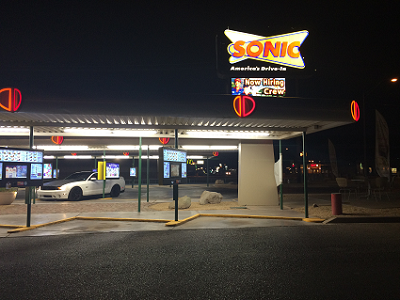 After imbibing all of Biosphere 2 I headed west to Roswell. This took me through my old stomping grounds in Alamogordo, NM. I stayed with my Army test platoon at Holloman Air Force Base on and off for several months and trained and participated in tests up north. We’d often stop at this Sonic in the evenings and I relived happy memories of chili cheese coneys and root beer floats. (I chose to pass on the onion rings…)

This entry was posted in Life and tagged feats of engineering, interesting places, travel. Bookmark the permalink.