The Ultimate Limits of Simulation

Last time I discussed the factors that drive the scale of any simulation or business system. One a less practical, more theoretical, more fun note, we might ask just how far a digital simulation can go? What kind of scope and scale can it reasonably achieve?

Let’s jump right to the end game, where we see the two main limitations. The first limitation is that we don’t yet know enough about how the universe works at the quantum level, and beyond a certain point we may never know. Even if we could represent every particle in the universe we still would not know how they behave and interact. Things appear to be nondeterministic. Does that mean that the universe is a Monte Carlo simulation? Are there multiple universes? Does free will exist? How does observation change the behavior of what is being observed? Do the details we observe at smaller and smaller levels really exist all the time or only when we specifically observe them? (And so on…)

Are we having fun yet?

This concept is touched on in a couple of places in science fiction that I’m aware of. Doubtless there are more. One is from Charles Stross’ book Accelerando, which sees a character’s simulated fork, sent across a large swath of space in a vessel the size of a soda can, trapped in a simulated environment where he gets to contemplate things for a while. The nod to the concept at hand is a reference to the simulation’s Planck length.

”How deep does reality go, here?” asks Sadeq. It’s almost the first question he’s asked of his own volition, and Amber takes it as a positive sign that he’s finally coming out of his shell.
“Oh, the Planck length is about a hundredth of a millimeter in this world. Too small to see, comfortably large for the simulation engines to handle. Not like real space-time.”
“Well, then.” Sadeq pauses. “They can zoom their reality if they need to?”
“Yeah, fractals work in here.” Pierre nods. “I didn’t—“
“This place is a trap,” Su Ang says emphatically.
“No it isn’t,” Pierre replies, nettled.
“What do you mean, a trap?” asks Amber.
“We’ve been here a while,” says Ang. She glances at Aineko, who sprawls on the flagstones, snoozing or whatever it is that weakly superhuman AIs do when they’re emulating a sleeping cat. “After your cat broke us out of bondage, we had a look around. There are things out there that—“ She shivers. “Humans can’t survive in most of the simulation spaces here. Universes with physics models that don’t support our kind of neural computing. You could migrate there, but you’d need to be ported to a whole new type of logic—by the time you did that, would you still be you?…”

The Planck length of our universe, the scale at which classical ideas about gravity and space-time cease to be valid, and quantum effects dominate, is on the order of 10-35 meters, while that of the described simulation is on the order of 10-5 meters. This defines a factor of roughly 10-30, which is still a really, really big number, indicating a very, very limited simulation in the big scheme of things. Such a simulation would still be far beyond anything we humans could implement now. This is science fiction after all.

I loved this passage the moment I read it because it captures two powerful concepts, the ultimate granularity of simulations and the granularity required to adequately represent certain activities, in such a small number of words. A reader would have to bring a lot to the book to follow it intuitively. I will note that my knowledge of quantum physics doesn’t go beyond what can be read in Discover Magazine, but it’s enough for an intelligent layman to have some minor feel for the topic. I’m confident that the description I’ve shared here wouldn’t be found unnecessarily wanting by a specialized practitioner.

Another reference to this concept comes from Star Trek: The Next Generation, namely a clever Season Six episode entitled Ship In A Bottle. It is a follow-on to a Season Two episode, Elementary, Dear Data, in which Data becomes enamored of the Sherlock Holmes mythos but finds that his machine-like memory and powers of deduction allow him to solve the genre mysteries too easily to be enjoyable. Geordi La Forge then suggests that the holodeck create a Moriarty character worthy not of Sherlock Holmes, but of Data, whereupon the holodeck creates one that turns out to be sentient. The episode is rather touching because the sentient creation renounces the violence and evil of the fictional Moriarty character and pleads for a chance to live a life in the real world. This scene shows the character’s interaction with Picard.

In this episode the character agrees to have its simulation placed in suspension until a way can be found to give it life in the outside world. The producers of the show made the episode thinking that Sherlock Holmes was in the public domain, which turned out not to be the case. It took four years to work out a way to revisit this setup in the Season Six episode. The setup is slightly different and the character causes even more trouble, but the crew finally trap him in a simulation that would keep him sufficiently engaged to not cause any trouble in the outside world. The device in which he is trapped is shown as a computer the size of a breadbox.

This scene shows the episode’s denouement, where the crew touch on the philosophical idea of living inside a simulation, and where the simulation host is shown.

Here is a close-up of the device, which is the glowing module attached to a unit that provides additional memory and presumably external power. 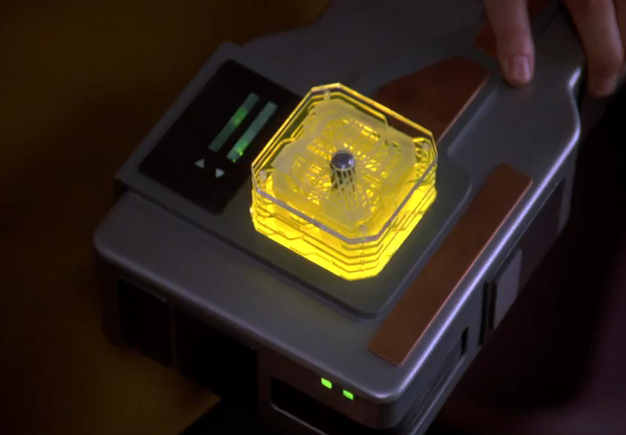 The computing power of the holodeck and the subsequent simulation host circumscribe the complexity and granularity of what can be simulated within. The concept isn’t acknowledged directly, but is rather inferred. It is something I picked up on because my combination of experiences makes me sensitive to it.

I’m sure there are other invocations of this concept out there. Please share any that you find.

This entry was posted in Simulation and tagged movies and television, Observations, simulation. Bookmark the permalink.