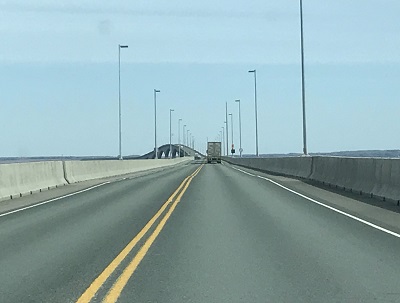 This weekend I finally made it to my twelfth Canadian province (only Nunavut remains) when I drove across the Confederation Bridge into Prince Edward Island (see also here). The bridge is seven miles long, 40-60 meters (about 131 to 196 feet) high, surprisingly comfortable to drive across (at least in a car), and must withstand high winds and massive seasonal ice floes. It is not the longest bridge in the world, but it is the longest bridge over ice-covered water.

Dealing with the seasonal ice was the main design consideration, from what I’ve read. This concern drove the spacing between vertical supports to be wider than originally planned — 250 meters per span as opposed to 175 meters. This spacing would indicate roughly 52 vertical supports along the 12.9 kilometer span but the spacing must be closer in places because other documentation indicates there are 65 vertical supports (14 and 7 in the shore approaches and 44 in the main span). The concerns about ice also drove the design of the bases of the vertical supports, which are angled so the ice rides up their lower slopes and breaks off. This exploits the fact that while ice is fairly strong in compression it is relatively weaker in tension. Experience has shown that the pylons cut through the ice smoothly such that seasonal flows are not meaningfully affected.

The bridge was opened in 1997 on time and on budget only four years from the initial approval, which strikes me as pretty impressive. I also read that a scale mockup was built and tested to failure, meaning that the builders were not yet relying solely on computerized methods of design and testing. Having lived through most of the transition to computer-aided engineering I’m always fascinated by the cleverness of engineers who worked with physical models, especially in cases like the U.S. Army Corps of Engineers Bay Model in Sausalito, CA.

An older gentleman who used to call on our fraternity house to sell cleaning supplies (I was House Manager at the time) spent a morning regaling us with tales of how mechanical linkages were used to machine symmetric shapes using a template that was only half complete. The milling heads had to be 180 degrees out of phase. I don’t know if he was blowing smoke or not but he sounded credible to me at the time!

I saw a television documentary about another fascinating bit of old-timey analysis when I was in England in the summer of 1987. It described the design of European cathedrals and used photoelastic analysis of plastic cross-sections to show how stress was distributed widthwise through the columns and arches supporting the central nave and one or more aisles on either side and lengthwise through semi-circular apses and buttresses on one or other ends. The designs were obviously highly varied but the basic ideas were fairly consistent. 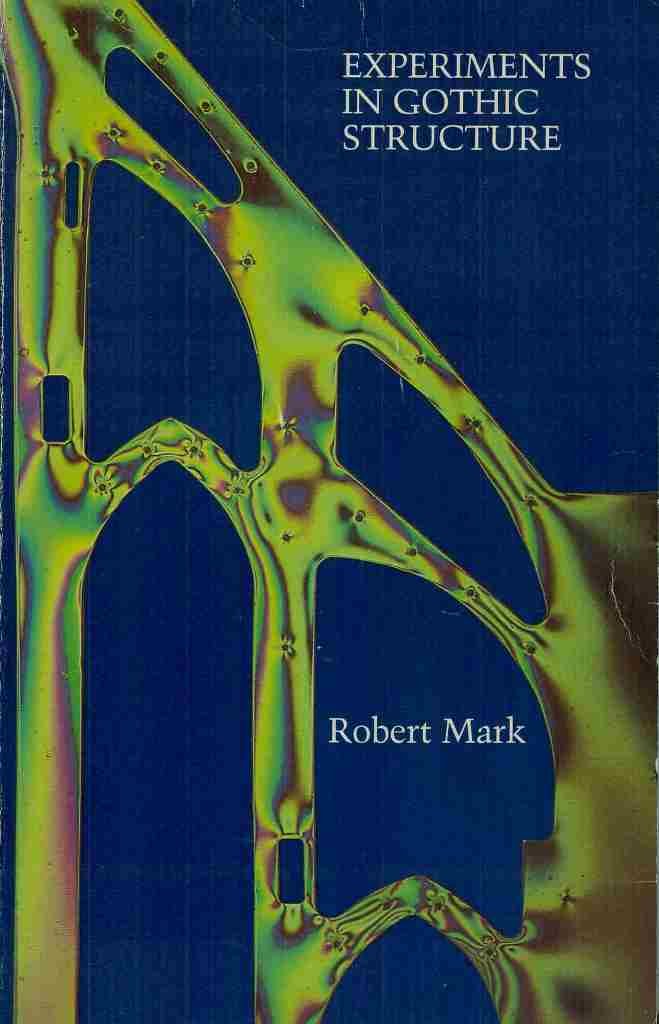 There have also been numerous documentaries that describe the history of technology. Many discuss efforts to reconstruct a range of Roman siege projectile weapons and one described life in England in 1900.

This entry was posted in Engineering and tagged feats of engineering, transportation, travel. Bookmark the permalink.