Order Of The Engineer

I grew up reading a bunch of popular technical magazines and always wanted to do something in that vein. Excelling in a seventh grade mechanical drawing class gave me an idea that I might become an architect but over time the arty side of that profession didn’t feel quite right. It therefore made sense to pursue engineering. That was more about solving a particular kind of problem that worked for me.

Fast forward many years to meeting an engineer at Westinghouse who wore a faceted iron ring on his right pinky finger. He said it symbolized the responsibility of engineers to do their best possible work and to safeguard the public. The Iron Ring is presented during a ritual called Ritual of the Calling of an Engineer. The ritual, interestingly, was written by Rudyard Kipling and was initiated in Canada in 1922. The ring is worn on the little finger of the working hand so it will contact the working surface on which the engineer is drawing or writing, to remind the engineer of his or her obligation.

There is a legend that the original rings were made from iron taken from the Quebec Bridge, the first iteration of which famously collapsed during construction in 1907, but in reality there is no connection between that event and the ritual. For practical reasons the rings today are mostly made of stainless steel.

The Canadian tradition inspired the Order of the Engineer in 1970, in which American engineers are presented a similar ring with a similar meaning. Membership in the Order, which is open to graduating or practicing engineers, is strictly ceremonial. I always thought this tradition was really interesting and when I found out there was an American version I became a member on March 30, 2012. 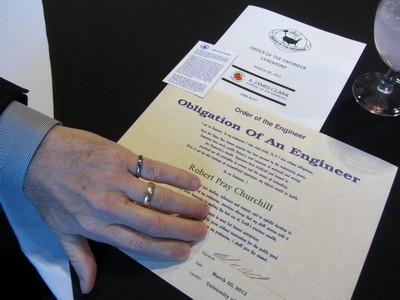 This entry was posted in Engineering and tagged history, traditions. Bookmark the permalink.