Be Honest When Things Go Wrong

One of the important lessons I learned at my first engineering job was to be honest and open at all times. This was never illustrated more clearly than when a refiner disc flew apart, tore through the pressurized refiner casing, took out the feeder mechanisms, and took chunks out of nearby floors and walls. Everyone was relieved to find out that no one was near the refiner when it happened; the debris surely would have killed anyone it struck. I’ve been at plants when it has happened, which is a bad as it seems, so it’s always a relief to find nobody was hurt.

This twin disc refiner was meant to grind wood chips or rough pulp into finer pulp. It had a rotating disc sandwiched between two static discs. The static discs could move in and out to adjust the gaps between themselves and the center disc. The surface of each disc was covered in refiner plates that were sharply grooved to shred fibers off the feed material as it moved from the shaft where it was fed in to the outer casing and refiner discharge. The five foot disc spinning at 1800 rpm stored a lot of energy. 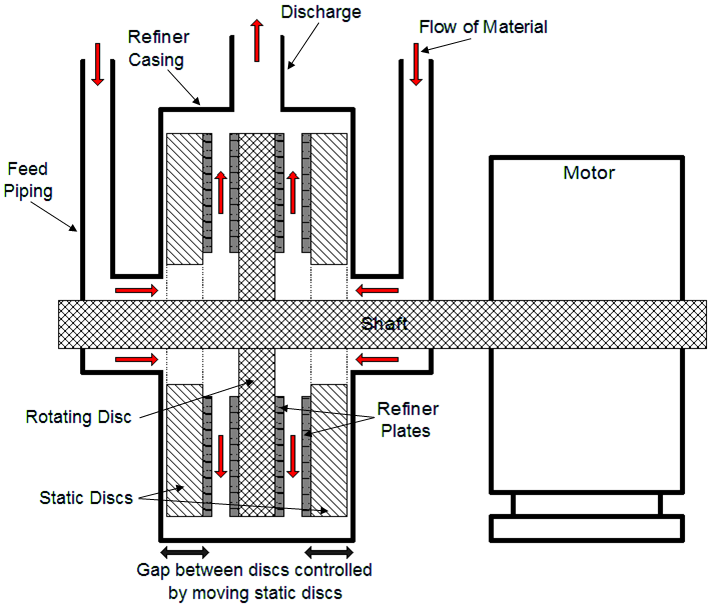 The refiner plates were bolted to the faces of the discs and if one of them detached it would kick around and chew things up but I don’t think it would shred through the refiner casing. The failure of the rotating disc itself was a different story.

We arrived at work on the morning of the accident to be briefed on the event and plot a course of action. There was some discussion of what caused the failure. Was it a flaw in manufacturing? Was it excessive vibration from the fact that the refiners in that bay were mounted on a floor that itself was suspended above a river and thus not very stable? Was it something that could have been looked into during the previous plate change, if the mill technicians had recognized the terrible condition of the older plates? None of us knew. Whatever the cause, the main thing I remember is that the senior managers made sure that the company put out a notice of the failure to everyone. I’m sure that they quickly produced replacement materials and had them shipped to the site so repairs could be completed as quickly as possible. The machines were still under warranty so the company covered all of the costs.

I don’t know if they ever figured out what the problem was, and I don’t know if anything like it has happened since, but I know it was addressed openly, honestly, and quickly. There can be no other way. Problems can’t be solved or prevented if information is hidden.  Customers won’t deal with companies or workers who aren’t forthright.

This entry was posted in Engineering and tagged Observations. Bookmark the permalink.